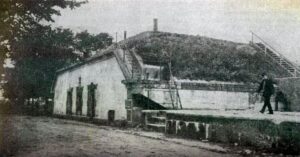 The Kalkbränderi_Battery. Emplacement and magazine

The Kalkbränderi Battery was built during 1880 to 1882.
I t was an open earthworks with only one line of fire. The battery was approx. 75 m. long and approx. 35 m. wide. The front had a thickness of approx. 13 meters with a 1.8 meter concrete lining.

It had on each wing a traverse, where in the northern traverse was an ammunition magazine. This had 4 meters thick front walls and was covered with 3 meters of ground cover.
The grenades themselves were stored in a galley under the front wall and could be hoisted up to the battery from here.

The battery was armed with: 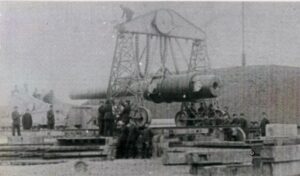 The battery was assumed to have been abandoned according the defense settlement in 1909, and sold in favor of strengthening Copenhagen’s naval fortifications.
Because of that the two 35.5 cm. guns were moved to the Dragør Fort.