Home » The Moat and the Canal

The Moat and the Canal 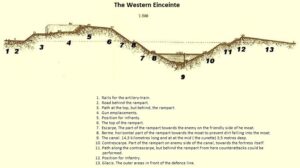 The profile of the Enceinte

The Western Enceinte is 14,3 kilometes form the Köge Bugt the the Utterslev Marsh. It consist of a moat with a canal in front of it. The earth and chalk from digging the canal, was used to build the moat.

The water flows from the Utterslev marsh in the north towards the Køge Bugt in the south. The canal was designed to have an overall depth og 2,5 meters and at least 16 metres wide.
In the middle there was provided some ekstra depth to 3,5 metres. That equaled that at man on a horse could not pass. The depth was supposed to be the same at all times. This was regulated by a number of dams.
The Dams were protected against crossing with some obstacles.

There were at few bridges crossing the canal. Some military and some civilian. All the bridges were prepared to be disconnected.

In the canal some flanking caponieres were placeed in a distance of 600 metres to each other.
Most of the caponieres only could fire in one direction, into the protectes back of the next caponiere in line.
This meant that a belt of fire could be obtained along the canal.
Where bridges made it neccesary, dual caponieres were made, being able to fire in both directions.

The moat was basicly like moats in ancient times. It was possible to hide and protect soldiers and equipment behind it, at it could be used as emplacement and protection of the artillery.

The new and revolutionary was the way the caponieres were used to provide flankink fire.

Behind the moat, and all along it, there was a road for transport and some railroad tracks for the artillery train.

Pictures of the moat