At all times a nation has had the need to protect its cities. Ramparts surrounded by wet or dry moats  were found in the vicinity of all major medieval cities.
Copenhagen was founded as a little trade- and fishing community. The capitol at that time was Roskilde in the middle of the island of Zeeland, where Copenhagen also is situated on the eastern coast.
At that time a very central position in the kingdom. (Both Sweden and Norway belonged to the Danish Crown)

Special in the middle ages and the years to come, every major city was heavily fortified.
Great mouds, sometimes combined with moats and palisades, defended by heavy artillery, archers and infantry. 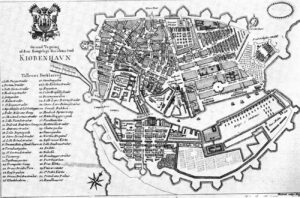 The second fortress of Copenhagen was a mound around the city, with wide moats in front. In the mounds there were 4 gates to the city.They names of the gates can still be found in the streets today.

In 1852, the old moats were given up. Until this time the city was build up behind the moads, and the population was growing rapidly.. To many people, little space, open sewers and poor hygiene led to epidemics. Plaque in 1711 (30% died)  and in 1853  Cholera and some smaller epidemics of Smallpox and Scarlet Fever.

After the partly successful war against Prussia in 1848 Denmark lost the second Prussian War in 1864. The army saw the results of effective and modern siege artillery and how vulnerable moads are, when not protected by guns and infantry.

The fortification, west of the Capitol from late 19´th, Century, was the 3rd fortification of Copenhagen.
The principle was to block access to the city, and preferably so that the enemy could be combarded while he tried to climb the moats and rampages. Meanwhile boiling oil or water was poured over the soldiers from the top of the palisades, while the attacker was trying to shoot over the wall with large stones and later artillery.
It was all about, that either the besieged city were destroyed or ran out of food, or the attacker also ran
out of food or ammunition and went home.
A strong fortress was important, especially in earlier times, when it was good military Latin, that if an army took a national capitol – then they possessed the whole country.

As the city grew were city gates and fortifications brought forward, and the moat ran from the Citadel to Kalveboderne and over Christianshavn. The Ramparts held out against the Swedish siege in 1648, but was bypassed from the sea by the English in 1807. During this attack the city  was bombarded. Much of the ramparts fron the 17th century are parks today.
The lake in Tivoli is part og these ramparts.

The city needed to grow, but it was prohibited to build in anything other than tree outside the ramparts, so that the buildings in case of an  attack could be burned and thus do not provide coverage for the advancing enemy. Also Tivoli  was the first many years forced to live under these military building restrictions.
The city grew inwards and upwards, and internal Copenhagen the side and rear building is a reminder of this. The Health and sanitation were deeply dubious, and the city was drowning in various waste.
The fortification had to be moved away from the capitol.Endvidere havde man lært af Dannevirke og Dybbøl. Moreover, they had learned from the battles at Dannevirke and Dybbøl. The modern rifled cannons could reach far, and a fortress should be located so far from the city, that it could not be reached by long-range artillery. At the same time it should be as big an obstacle that it could not be to overcome without very significant losses.

In 1868 Copenhagen already had grown outside the moads and demolishing the old city walls was necessary. In 1876 construction of the new third fortificatition of Copenhagen began.

How the officers concidered the need for a new defence line is very well described by the danish colonel Rolf Kall in 1906 in a military article:
“Chieftains and negrokings can manage to make war, wandering from place to place.The administration of civilized countries will soon halt, if the enemy becomes lords in the country. Therefore, at least the capitol, other important cities and parts of the country, must be fortified.”

The fortifications was placed where we know it today, 14 km from the center of Copenhagen.